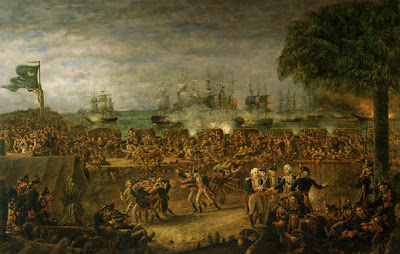 
Today marks the 236th anniversary of the Battle of Sullivan’s Island, a conflict that made Moultrie a local household name and set the British back considerably in their quest to tame the colonists.
“This was an early turning point,” said Doug MacIntyre, president of the Fort Sumter-Fort Moultrie Historical Trust. “We can only speculate as to what might have happened if the patriots had not prevailed.”
On June 28, 1776, when the Declaration of Independence was being hashed out in Philadelphia, the British Navy descended on Fort Sullivan at the south end of the island as thousands of ground troops simultaneously tried to cross Breech Inlet to take the island’s north end.
It was part of Britain’s southern strategy to mobilize loyalists in the South Carolina backcountry and control one of the colonies’ most important ports.
Commodore Peter Parker aimed the might of the British Navy at the palmetto-log fort guarding the harbor entrance while Gen. Henry Clinton tried to take the island with 3,000 troops that had landed on Long Island (now Isle of Palms).
The most famous detail of that day remains the spongy palmetto logs of Fort Sullivan repelling British cannon fire — a detail that guaranteed the palmetto its place as a state icon. But Mac-Intyre said the battle at Breech Inlet was perhaps even more impressive.
The inlet in those days was at least a mile wide, a dangerous obstacle course of rushing water, sandbars and oyster beds. And if that weren’t bad enough, Clinton had to face a formidable force assembled by Col. William Thomson.
Thomson and his back-country troops were joined by Indians from the Catawba and other tribes, as well as some slaves.
There were 780 men in all, but once the fight started, Clinton feared that he was facing an army of perhaps 4,000. Mac-Intyre said Clinton never got a foothold in Sullivan’s Island.
Meanwhile, William Moultrie repelled the British Navy so handily that, after the war, Fort Sullivan was renamed in his honor.
MacIntyre, who will speak today at the Carolina Day ceremony in White Point Garden, said new accounts of that day are still coming to light, and they paint a portrait of Charles Town as worried and anxious — just as it would be a few years later when the British had the city under siege again, this time more successfully.
Although the state celebrates Carolina Day every year, much of the rest of the country has forgotten what a pivotal moment it was in the Revolutionary War.
“It was an embarrassment for Peter Parker, a rising officer in the Royal Navy,” said W. Eric Emerson, director of the state Department of Archives and History.
“It’s the most powerful navy in the world, and they are beat by a gang of rebels in a palmetto-log fort. I think it’s pretty significant, and wish more people would recognize it.”
Reach Brian Hicks at 937-5561 or follow him on Twitter at @BriHicks_PandC.

Posted by Montraville Mullins at 6:38 AM No comments:

For six weeks, the city held off enemy troops, fighting the longest siege of the war to preserve the freedom of a newly founded nation.
Now, thousands of people walk the site every day without even realizing it is a battlefield -- the largest in South Carolina -- or the role it played in the holiday the country celebrates today.

"I'm always amazed when I give tours that people don't realize there was a major battle here in 1780," said Carl Borick, assistant director of the Charleston Museum and author of "A Gallant Defense: The Siege of Charleston, 1780.
"The siege is important. It was the largest battle in South Carolina during the Revolutionary War."
Today almost nothing remains to remind folks of that struggle, save for a bit of tabby unearthed on Marion Square. Last week, a national park preservation organization issued a report on the state of battlefields in South Carolina, and in it there was no mention of the Siege of Charleston grounds.
That may be because its status is "paved." How things change in a couple of centuries.
More than 230 years ago, what is now John Street was a moat, a blocked tidal creek of the Cooper River that penetrated deep into the peninsula. Vanderhorst and Charlotte streets roughly mark the parapet on the city side of that moat, all of which protected a fort that straddled what is now King Street.
The siege took place between present-day East Bay and Smith streets, from Spring Street south to Calhoun Street.
In a city obsessed with its Civil War history, its Revolution-era past often is forgotten. Until a historical marker recognizing the siege was put up on Marion Square this year, there was no reminder of the battle.
"It is something that is very often overlooked," said Mark Moloy, a former National Park Service intern here who was instrumental in getting the marker erected. "I just don't see a reason we can't honor the people who first founded South Carolina and the United States."
Some cynics might say the battle has been pushed out of the city's consciousness because it was a stinging defeat, perhaps the largest of the war. After years of trying to take the city in 1776 and again in 1779, the British set up on Hampstead Hill -- basically the corner of present-day East Bay and Columbus streets -- in April 1780.
Following six weeks of the siege, the Americans surrendered and the British took more than 5,000 prisoners, including three signers of the Declaration of Independence. Borick said the siege, and subsequent defeat of the colonists, actually set up a chain reaction that turned the course of the war in America's favor.
Charleston fell, in part, because many militia men -- worried by a rumor of smallpox in Charles Town -- did not show up to fight. That left them available for other South Carolina battles, at King's Mountain and then Cowpens, that set the course for American victory in the Revolution.
And the British victory at Charles Town left the Redcoats over-confident, thinking they had, in effect, conquered the Carolinas.
For all those reasons, Borick said, Charleston played an important role in America's Independence.
Don Barger, southeast regional director for the National Parks Conservation Association, last week released a report on the condition of the battlefields at King's Mountain, Cowpens and Ninety-Six. The idea, he said, is to highlight what remains to tell the story of these parks.
The loss of battlefields, in part, plays a role in how much of the South's role in the Revolution has been forgotten.
"When most people think of the Revolutionary War, they think it happened between New York and Virginia," Barger said.
Historians are happy to see a little more focus on the city's Revolutionary history these days.
Aside from the annual Carolina Day celebration, which marks the 1776 battle in which Col. William Moultrie repelled the British navy and army from Sullivan's Island, this year the Historic Charleston Foundation will highlight the lesser-known parts of that battle, namely the battle at Breach Inlet.
That day, about 780 patriots repelled more than 10,000 British troops trying to cross from Long Island (now the Isle of Palms) to take Sullivan's Island and its fort. On Wednesday, the Historic Charleston Foundation will offer free public presentations about that fight at its headquarters at 40 East Bay St.
"I'm hoping we'll be able to get more people interested," Moloy said. "That's what the (Siege of Charleston) marker is about. There is a ton of history but there's nothing much to see. Getting information out about it is an ongoing process."
Posted by Montraville Mullins at 12:55 PM No comments:

Email ThisBlogThis!Share to TwitterShare to FacebookShare to Pinterest
Labels: Charleston 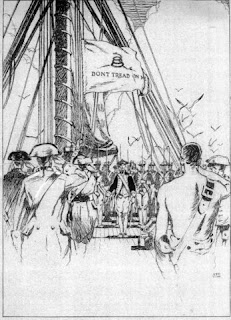 Posted by Montraville Mullins at 8:52 AM No comments:

New park could be historic treasure


This is what we have been working on the past year, so we hope to get back to work on the blog now that it has become a reality.

SUMMERVILLE - The jungle-like stretch of the Ashley River, where it turns from a blackwater creek to a tidal stream, alone made Dorchester County's newest park property irresistible. The property might well have once held Gen. William Moultrie's "lost fort," among the most significant regional Revolutionary War sites not yet located.
There's one more thing: This park just might make money.
"Canoe and paddleboat rentals, shelter rentals, festivals, weddings, there's so many resources out there. The entire canvas is a blank slate that can actually pay for itself, in my opinion," said Tom O'Rourke, Charleston County Park and Recreation Commission executive director, who was consulted on the purchase.
The 83-acre tract Dorchester County is buying for its latest nature park is a prized piece of open land in the densely packed suburban area outside Summerville.
The county voted Monday to buy the property for $1.35 million. The site, formerly slated for residential development, had been in bank receivership.
It sits north of the river and east of Bacons Bridge Road, diagonally across the bridge from the newly opened woodland trail, Rosebrock Park.
The river tract is the third significant property bought in the past few years in the suburban lower county, where the county previously had no parks. In 2010, voters overwhelmingly passed a $5 million bond for parks and open space.
The other property is the Pine Trace tract off Miles Jamison Road.
The county also purchased 2 acres fronting the river tract along Bacons Bridge Road that it plans to sell for a compatible business to help pay for the park.
County Councilman Jay Byars, whose district includes the river property, said the park could be up and running relatively quickly. Some $3 million worth of infrastructure already is in place from the previous development effort, he said, including sewer lines, a fishing pond with gazebo, a dock on the river and a riverside trail with boardwalks.
With that value already on the ground and the potential for the park to support its own operation, the purchase "was a no-brainer," he said.
"You've got 3,000 feet of frontage on the Ashley River that the public can get out and enjoy. I don't think there was any argument on council. It was a once-in-a-lifetime opportunity."
Then there's the "lost fort."
If archaeological digs confirm the place as the site of the Moultrie's camp, Byars suggested that the park might well be developed around that history, making it a regional attraction.
"I'm excited about the potential, the preservation of an important site and what it can do for the economy of the county," said Summerville historian Steven Steele.
The historic Bacon's Bridge crossed the river in the vicinity during the Revolutionary War and was a key strategic point, the inland wagon route to the fort and town just downstream at what is today the Colonial Dorchester State Historic Site.
Moultrie's camp would have protected the bridge.
Together, the nearby sites could make up a bigger historical trail attraction that could be traveled by water.
Patrick O'Kelley, who wrote a history of the American Revolution in the Carolinas, has visited the park site.
At one point, more than 1,000 American soldiers, some under "Swamp Fox" Francis Marion, were stationed near the bridge, a massive encampment that likely took up at least some of the park grounds, O'Kelley said.
"It's entirely possible" the park is that site, he said. "It makes sense."
Reach Bo Petersen at 937-5744, @bopete on Twitter or Bo Petersen Reporting on Facebook.
Posted by Montraville Mullins at 5:23 PM No comments: 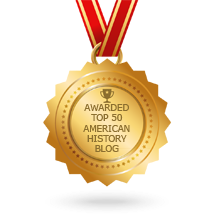 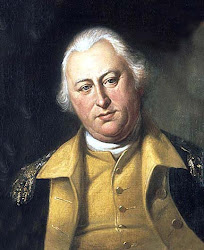 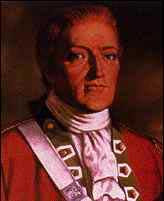